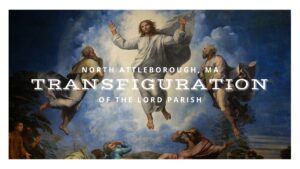 “Not built of the gold and surplus and leisure of the wealthy, but with the pennies and the want and labor of the poor. Not built through pride or rivalry or petty jealousy, but through faith, to shelter Him in Whom we hope for life eternal.

From a humble dwelling, a small hall, an unpretentious mission church to an edifice which is a fitting house of worship for all. From the smallest congregation to the largest; from the poorest to the richest; from a mere handful of faithful exiles to a people outnumbering all other religious bodies in North Attleboro put together. Surely God has blessed us. May He continue to bless us. May He preserve in us and in our successors, that true faith which alone can bring about such great results. May He guide us on through the rocks and shoals of time, each and every one, to that great temple, where, within the Holy of Holies, with joy unending and immeasurable, we shall adore Him face to face.”
From a Historical Sketch of St. Mary’s Parish  1901 at the time of the dedication of the completed Saint Mary of the Immaculate Conception Church

Transfiguration of the Lord Parish has grown from the foundations of the three Catholic Parishes in North Attleborough. 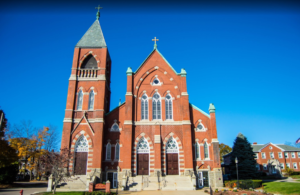 Saint Mary of the Immaculate Conception Parish: The first Catholic Church in the Attleboro area, Saint Mary’s began as a result of the dedication and devotion of a small group of Catholics.  As early as 1848, local Catholics arranged for Masses to be said in private homes and smaller buildings in the area. In 1852, land was purchased for a small Church to be built on what was then known as the “Peck’s Mt.” area of town. On June 19th, 1859—St. Mary’s of Attleboro (before North Attleborough was incorporated) Rev. Gillick was named first Pastor in residence. In 1877, the Tifft estate was purchased, and work began for a larger home for the growing parish.  In 1890, the cornerstone was laid for the building that would become known as Saint Mary of the Immaculate Conception Parish. Dedicated in 1901 in the current location in North Attleborough the Church has been the sight of worship by generations of Catholics in the North Attleborough area. 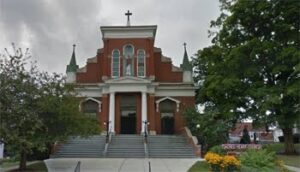 Sacred Heart Parish: Sacred Heart, long desired by the town’s French-Canadian population, was established in 1904, the upper church being completed in 1929.  The 1904 establishment of Sacred Heart Parish, North Attleborough, was due originally to the efforts of the Conseil Duvernay de L’Union St. Jean-Baptiste d’Amerique, which started working for a French parish in 1901. On September 4, 1904, this was accomplished and Rev. d. D. Villandre was appointed Sacred Heart’s first pastor.  Many parish activites were planed during the succeeding years in preparation for the erection of parish properties. By 1905, Father Villandre was able to purchase a large piece of property on Church Street, and the existing house was repaired to serve as the rectory. Land for the church was purchased in 1907, and on January 21, 1909, construction was under way. The basement church was completed, and the first Mass celebrated in August of that year. 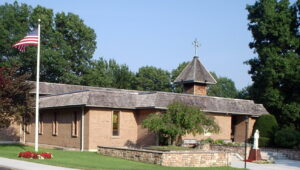 Saint Mark Parish: As early as 1927, Bishop Feehan envisioned a parish in the Falls section of North Attleborough as the Catholic population in the area began to increase. Bishop Connolly supported those efforts and established the new parish forty years later. The youngest parish in the area was founded in 1967, the first Pastor Rev. Raymond W. McCarthy, presiding over the early years at Bishop Feehan High school until the new church was competed in 1971. During the fundraising and construction phase of the building,  Father McCarthy wrote: “Now we are preparing to erect a modest, dignified church in which to carry out the liturgical life of our parish. I hope and pray that the appetite so long restrained will assert itself and give evidence of our vital interest in honoring God and providing for the religious education of our children.” Families joined the newest Catholic parish and began to work together to bring to life the parish as it was first envisioned in 1927.  Saint Mark Parish has served the families in the Attleboro Falls section of North Attleborough with active ministries, celebrating 50 years of parish life in 2017.

Over the years the numbers of active Catholics in the North Attleborough area who supported their parishes through active participation and financial contributions began to decrease. Similarly, the number of priests in our Diocese of Fall River declined with fewer men joining the priesthood.  Those priests who served in parishes around the Diocese for many years began to age. Throughout the Diocese, parishes were joined or closed with insufficient priests to pastor the faithful of so many individual churches. In time it became apparent that change would be needed in North Attleborough. In 2014 the first efforts began with the assignment of one Pastor to both Saint Mary of the Immaculate Conception and Sacred Heart Parish. Under the direction of the Bishop of Fall River, Rev. David Costa consolidated the parish offices and staff and the process of gathering parishioners together began.  In 2017, this process continued when the Father Costa was also assigned as Pastor to Saint Mark Parish, creating one Catholic Community of North Attleborough. Efforts for unification of the separate Parishes continued at that time with the combination of  resources, adjustments to Mass schedules and the creation of one centralized office under one Pastoral Team.

Moving into the Future 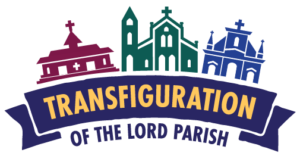 After three years of actively combining resources but maintaining three separate parishes, it became evident that more needed to occur to bring the three independent faith communities together. In June of 2019, a new Pastor was assigned to work with parishioners to develop a blueprint for the future of the Catholic life North Attleborough. Reverend Rodney Thibault became the new Pastor of the Catholic Community of North Attleborough. After meetings with parishioners, the formation of a Unification Assembly and guidance from the from the Diocesan Office of Strategic Planning, the decision was made to create one new Parish in North Attleborough.  At the stroke of midnight at 12:01 am on January 1, 2020, by the formal Decree of the Bishop of Fall River, Most Reverend Edgar M. da Cunha, the three Parishes of Saint Mary of the Immaculate Conception, Sacred Heart and Saint Mark were suppressed and the new Transfiguration of the Lord Parish was created.

Shortly after the formation of our new Parish, the global pandemic began and once again, our faith community was faced with real challenges of how to worship safely but separately. Father Thibault with the assistance of the Parochial Vicar, Father Jack Schrader, began on line Masses broadcast live from the Parish Chapel. From March through May our only way to gather was virtually – but gather we did.  In our homes we were able to connect with others from our faith community and friends from around the country to participate virtually in the celebration of the Mass. Holy Week and Easter were “remote only” but in our isolation our faith was able to bring a stronger sense of community. Slowly and safely our Pastor began outdoor Masses where people were able to come to Mass and receive the Eucharist for the first time in months at the celebration of Pentecost in 2020. As each phase of the opening occurred, our Parish responded. Churches were open with social distancing, masks and reservations. Slowly restrictions were lifted. 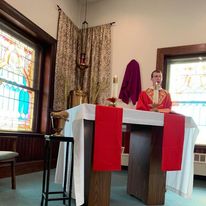 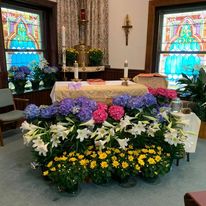 Studio B – Online Masses live from the Chapel 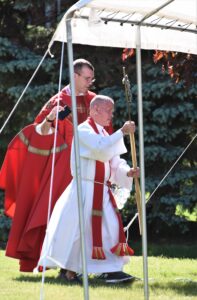 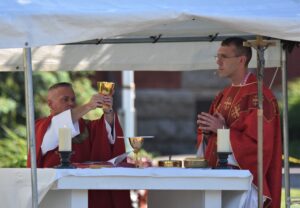 Masses from the “Chapel on the Hill”

Now as our area begins to return to routines of life before the pandemic, we as a faith community have work ahead of us. We must continue to develop and implement plans that will bring Transfiguration of the Lord Parish into the future. With the support and prayers of our community, we hope to provide a home now and for future generations of Catholics in North Attleborough.

“Surely God has blessed us. May He continue to bless us. May He preserve in us and in our successors, that true faith which alone can bring about such great results. May He guide us on through the rocks and shoals of time, each and every one, to that great temple, where, within the Holy of Holies, with joy unending and immeasurable, we shall adore Him face to face.”

We invite you to join us!

Women’s Tuesday Evening Bible Study
The Tuesday evening group has resumed Bible Study beginning promptly at 6:30pm and ends around 7:30pm.
This is a time to get closer to God by not only reading and listening to God’s word, but to feel His presence in your life.
To understand what God’s plans are for each of us who are faithful to Him.
To avoid the pitfalls of life and to allow God to guide us through our struggles.
To recognize the graces we are given by God to draw us closer Him.
To share our faith with others.
The women who are currently participating are like minded, searching for God’s spark of life to ignite our faith journey with other women on the same path. Our group consist of women from all ages. We currently are meeting primarily on ZOOM. If you are not familiar with ZOOM we will assist you in getting started.

Finding us on line

When requested by the family,  we are able to live stream funeral Masses through our Facebook live page.  Please click on the Facebook link below and look for the live events. If you are not a Facebook member, you can click on “not now” when asked for registration information.

Our Parish Facebook live page, enables many in our community to come together “virtually” for daily Mass on Monday – Thursday .

Daily Mass is celebrated in person and lived streamed as technology allows. Monday/Wednesday – 4:30 pm at Saint Mary
and Tuesday/Thursday 8:00 am at Saint Mark .
Masses remain on the Facebook page for viewing at a later time.

The link is found below:

You can  find Transfiguration of the Lord Parish North Attleboro on YouTube.  You can either search the name or you can click on the link below.   You  can also watch previously recorded Masses on this channel  in HD

We need your support!

To participate in on line giving to the Parish please follow the link:

Budget envelopes and donations may also be mailed to the

Thank you for your generous support!!!!!!

Transfiguration of the Lord Parish Office